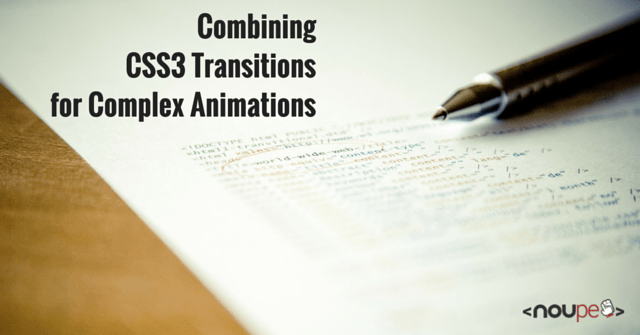 The „transitions“ attribute knows four different values. The first value determines which attributes should be animated per transition. While „all“ simply animates all attributes (as long as there is something to animate), you can also choose to only animate a specific attribute.

The second value defines the duration of the animation in seconds and the third value is responsible for the easing – „ease“ „ease-out“ or „ease-in“, for example. There is also the option to define a temporal offset. This makes the transition start after a specific period of time.

In the example, the values „border-radius“ and „transform“ are altered on hover. The animation takes two seconds, but it starts with an offset of one second.

Transitions With Attributes Animated at the Same Time

Most of you probably know the way presented here. Unfortunately, it has the disadvantage that the transition for all attributes – „border-radius“ and „transform“ in this case – play at the same time. However, a slightly changed markup allows you to assign an individual animation duration as well as an individual delay to each of them.

In the second example, custom values are assigned to every attribute that is supposed to be animated via „transition“. The values are separated by commas. Here, the animation of the „border-radius“ attribute starts half a second after the start of the „transform“ attribute’s animation.

Transitions With Attributes Animated Independently From Each Other

This way, you can create thoroughly complex hover effects without using JavaScript as well as without nesting HTML elements and equipping every single one with a transition effect.

Additionally, the order of animations stays the same even when the movement is reversed. Here, „transform“ is animated first, followed by „border-radius“.

Advantage over „@keyframes“ and „animation“

Of course it’s also possible to define such complex animations with the CSS3 attribute „animation“ in combination with the „@keyframes“ rule. Transitions, however, have an advantage, as the animated transition adapts automatically, when the class or pseudo class is changed.

This means, that when you leave the hover status before completion of the transition’s animation, the animation is automatically animated back to its original appearance. This doesn’t happen when using „animation“ and „@keyframes“.

All of the presented transitions have their limits, however, for example when you want to animate different „transform“ effects independently from each other, like „scale()“ and „rotate()“. After all, both are defined by the same attribute. If you want independent animations, you will have to use „@keyframes“ and „animation“.

Denis works as a freelance web designer since 2005.